Oh how I love food! There are a few restaurants at which I always seem to get the same thing over and over again. Olive Garden is one of those places for me. I have tried to figure out how they make such good Alfredo sauce. I have tried several different recipes, all of which have turned out good, but not quite the same. The other day I was talking with some of my wonderful co-workers discussing food (of course). Olive Garden, their bread sticks, and their Alfredo sauce came up. We were all stuck on the idea and practically salivating just thinking of it. I called my sweet husband and had him go pick us some up. It was wonderful! While we were on their website we realized that they had recipes. They actually have their Alfredo sauce recipe on their site. I of course had to try it just so I could share with all of you my results. I'm not really sure that it is 100% the same, but the taste is pretty much amazing. This is the best Alfredo sauce I have ever made. I will continue to try and tweak it to see if I can't get it to taste just like the real stuff. 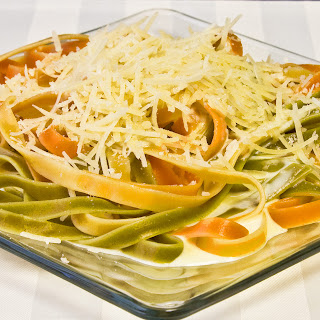 Salt and black pepper to taste

HEAT milk and cream in a heavy bottom saucepan until it begins to simmer. Turn off heat. Slowly whip in cheese, then remove from heat.

PLACE egg yolks in a separate bowl and slowly whip in a portion of the hot milk and cream mixture. Slowly add egg yolk mixture back into remaining cream mixture. Place back on very low heat and continually stir until simmering. Take sauce off heat so it thickens. (This will increase temperature of egg yolks, known as tempering).

SEASON to taste with salt and black pepper. Serve over your favorite pasta.

Recipe Source: Olive Garden
Posted by Angie at 6:00 AM