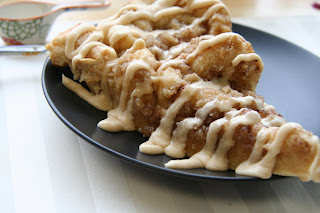 My grandma makes the best cinnamon rolls. I have tried her recipe and many others but there is just something about how she does them that makes them amazing. I think it is just the grandma's touch that makes them great. This idea kinda came to me the other day as I was driving. I was thinking about her amazing cinnamon rolls, and also thinking about yummy dessert pizzas and thought why not make a dessert pizza out of my grandma's cinnamon rolls. The results of this combination turned out just as amazing as I had hoped!

Dissolve the 2 tbs yeast in 1/2 cup warm water set aside.  In your stand mixer with dough hook attachment combine the scalded milk, salt, butter, and sugar. Let rest until the butter is mostly melted and the temperature is just barely warm to touch. Add the yeast mixture, flour, and eggs. Mix and knead well. Cover and let rise until double in size.

Roll out dough on a floured surface to approximately an 18X24 inch rectangle. Brush lightly with 1 tbs melted butter. Sprinkle with cinnamon sugar. Roll up like you are making cinnamon rolls. Using unflavored floss or a serrated knife cut thin slices of cinnamon roll dough. The thinner the better but keep it as consistent as possible. Place cinnamon rolls on a greased pizza pan. Start in the center with one and add more around it in a circular manner. Try and get them as close to each other as possible, but they do not have to be perfect. As the dough raises it will fill in any gaps. When the pizza pan is completely filled with cinnamon rolls press down on dough with your hands to try and fill in any gaps and to form more of the traditional pizza shape. Again it doesn't have to be perfect, the individual cinnamon rolls are what makes this pizza fun and unique.

In a food processor combine the brown sugar, white sugar, flour, and cinnamon. Pulse briefly to combine mixture. Slice your cube of butter into thin slices and add to your food processor. Pulse until mixture is combined and appears slightly crumbly. Sprinkle butter and sugar mixture over cinnamon roll crust.

Bake in a 375 degree oven for 18-25 minutes depending on how thick your crust is. The edges and bottom of your pizza should be a golden brown color.

For icing place butter in a sauce pan over medium low heat. Stirring frequently melt the butter and continue cooking until the butter turns a nice amber color and gives off a slightly nutty aroma. Pour the browned butter into a mixing bowl and add the powdered sugar, evaporated milk and vanilla. Mix until well combined and frosting starts to thicken slightly as the butter cools.

Drizzle the frosting over the pizza. You can either drizzle it over the entire thing or individual slices. Enjoy!

Note: this recipe makes more than enough to fill a fairly large pizza pan with some left over. I made a pizza and used the rest to make a small pan of normal cinnamon rolls.

Here are some photos of the process:

Roll out the dough. 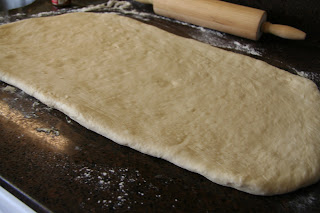 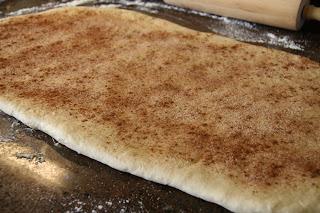 Start placing on pan in a circular manner. 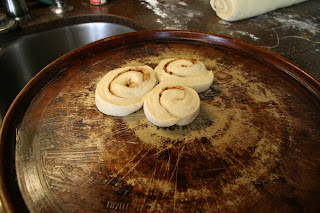 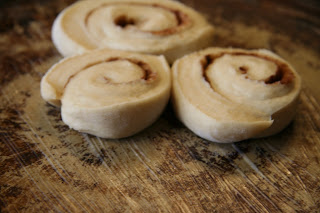 Fill pan and press down on dough slightly with hands to help form into shape. 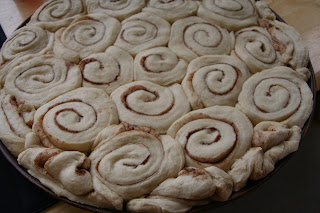 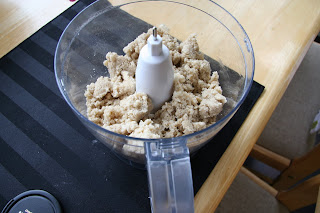 Sprinkle on dough. Ready to bake. 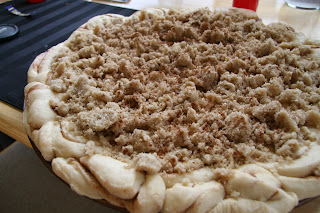 Fresh out of the oven. Edges should be a nice golden brown color. 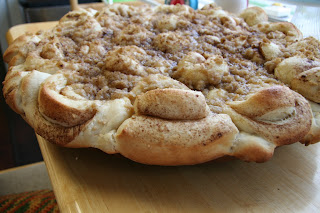 Sliced and drizzled with yummy browned butter frosting. Now its time to enjoy! 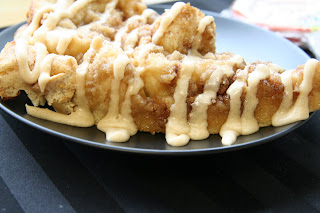