I hate to admit this but I spend over an hour this morning reading about the health benefits of coconut oil. Let me tell you its pretty awesome. Now those of you who really know me might know that I don't like coconut. I don't really know what it is about shredded coconut, but I really don't like it. Anything that has coconut in it I shy away from. Spencer bought some coconut oil a while back and has been using it kinda as a lotion at times, and I have used it as an eye makeup remover (works great by the way). I hadn't ever really thought too much about eating it though. Yesterday I had a patient tell me about this green smoothie girl. I decided to look her up today which then somehow took me to coconut oil :).

I have decided that I'm going to start using more coconut oil in my baking. Most of you know that I really really love baking, and trying new recipes! Now when I get an idea in my head I have to do something about it....so I went out and bought some organic virgin unrefined coconut oil (supposedly this is the healthiest kind or something). I found a really yummy kettle corn recipe that I just found here.  I must say it is pretty good! I will keep you all updated as to how this coconut venture goes for me :). 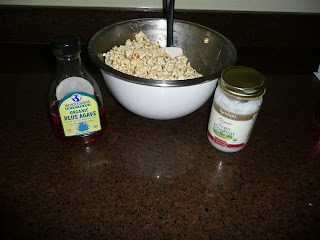 Here is the recipe.

Now I didn't know what that type of salt was so I just used sea salt and I worked just fine.
Posted by Angie at 4:56 PM